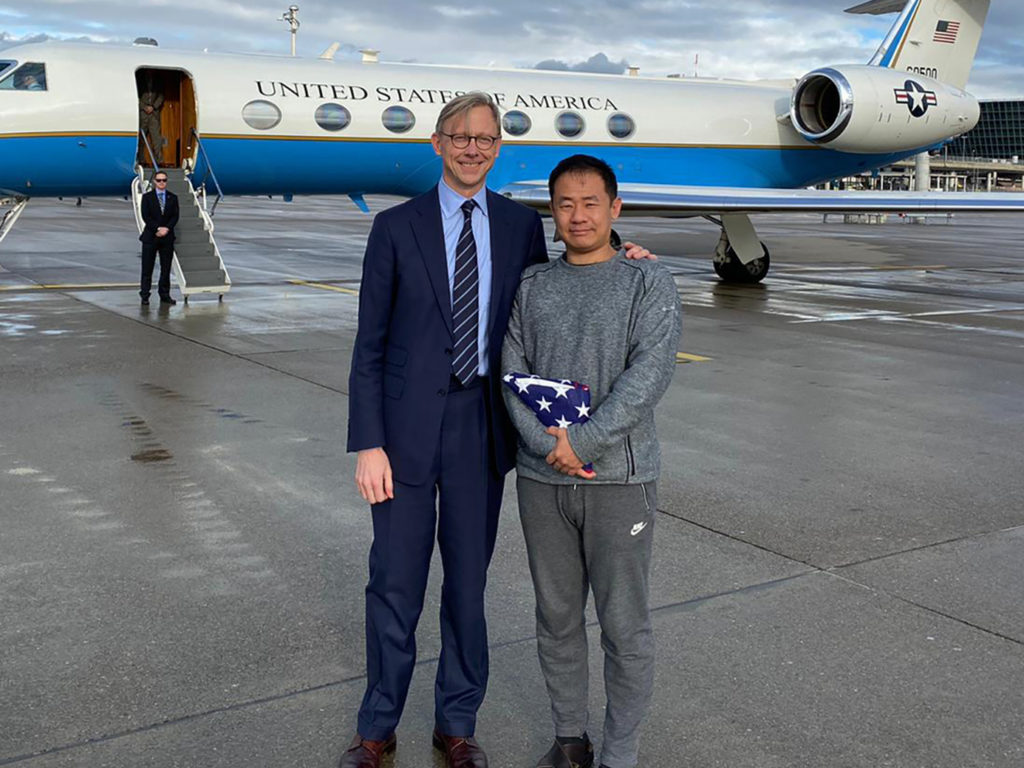 n August 2016, shortly after I was arrested by the Iranian Ministry of Intelligence, one of my interrogators asked me what I thought of the antagonism between Iran and the United States. I told him frankly that like many Americans, I did not believe that Iran and the United States should be enemies. I said that I thought President Barack Obama should visit Tehran and turn a new page in the relationship, just as President Richard Nixon had done by going to Beijing in 1972. The interrogator sneered. The U.S. president would never be welcome in his country, he told me.

My view of the relationship between the United States and Iran, and of the nature of the Iranian regime, would gradually change over the course of my 40 months in Tehran’s notorious Evin Prison. There I witnessed the regime’s actual workings from the inside, and I learned a great deal from interacting with other prisoners—Iranian men from all walks of life, many of whom had previously worked for the regime.

My comment—that President Obama ought to visit Iran in an effort to normalize relations—was later used as evidence against me in a yearlong farcical legal process. I was accused of attempting “soft subversion” and “infiltration,” with the aim of toppling the Iranian regime. As ridiculous as it might seem, the Iranian regime uses such rhetoric not only to convict and sentence innocent Americans, who are mostly used as hostages to extract concessions from the U.S. government, but also to express a principal ideological preoccupation of the regime: reconciliation with the United States is threatening and unacceptable, and all attempts at rapprochement must be suppressed.

Anti-Americanism lies at the core of the Islamic Republic’s state ideology, which casts Iran as the defender of Muslims against an expansionist, imperial United States. Iran has no interest in reconciling or normalizing relations with the United States, because doing so would invalidate the revolutionary regime’s raison d’être. At a more practical and opportunistic level, the rhetoric about the threat and menace of an unrelenting foreign foe justifies the regime’s domestic repression and its efforts to expand its influence throughout the Middle East and beyond.

The need to maintain hostility against the United States, regardless of the U.S. policy orientation toward Iran, is widely acknowledged among Iranian officials. A prisoner who had worked in a high government office told me that Saeed Jalili, the former secretary of Iran’s Supreme National Security Council, had commented that the regime does not want any reconciliation with the United States because it would undermine the regime’s legitimacy; instead, the regime wanted to maintain a “manageable” state of tension with the United States in order to justify its domestic and foreign policies. In the same vein, I learned from a prisoner with firsthand knowledge that a former Iranian ambassador to the United Nations lamented that Iran’s long-term national interest would be harmed by permanent hostility against the United States, but he still advised his subordinates to abandon the naive hope of rapprochement, for the regime of the Islamic Republic would never allow it.

Regime loyalists exploit the hostility against the United States for personal and institutional gains, and in so doing, they reinforce the enmity. My interrogator told me toward the end of my interrogation process that I must confess to being a U.S. spy, even though he knew I was not one. This confession was necessary, he said, so that the Iranian intelligence services could create a case against me and demand monetary payment and a prisoner exchange from the United States. I was shocked by the interrogator’s candor and utter cynicism. I would also learn, from Iranian media sources, that the intelligence wing of the Islamic Revolutionary Guard Corps (IRGC) and the Ministry of Intelligence, the two major rival intelligence services in Iran, openly argued about which of them should take credit for the recuperation of $1.7 billion in frozen assets that coincided with the release of American prisoners in January 2016. A logical consequence of such a debate was that the competing factions of the Iranian intelligence services continue to arrest more Americans to use as political pawns.

U.S. sanctions might seem a heavy price to pay for “manageable” hostility. But even sanctions can be turned to some benefit, so long as they leave room for the regime to profit by monopolizing key sectors of the economy at the expense of ordinary citizens, even while perpetuating the myth of Iranian victimhood for domestic and international audiences. Certain privileged groups, such as the Office of the Supreme Leader and the IRGC, have profited immensely by circumventing the sanctions through illicit means such as international money laundering and smuggling. Several prisoners who formerly worked for the regime in money laundering and in circumventing sanctions proudly shared with me their feats in this regard. They also conceded that better calibrated and implemented sanctions could be very costly and difficult to circumvent and would therefore put greater strain on the regime.

At times, observers and policymakers in the United States have vested their hopes, and even their policies, in the possibility that tensions among Iran’s political factions might serve to attenuate the regime’s anti-American commitments. Such thinking is wishful at best. The so-called moderates in Iran are not a unified political force, with a well-defined political agenda and leadership, that can offer a realistic alternative to their hard-line “opponents.” Nor do they control significant economic or military resources even when they hold elected power. They are instead another face of the same regime, and one that lives in symbiosis with its counterpart: the hard-liners rely on the moderates to lead all legitimate interactions with the international community on behalf of the regime, while the moderates depend on the hard-liners for maintaining their political privileges inside the country. The two factions share the common goal of preserving the theocratic regime on which the interests of both depend. Many Iranians have come to see the moderates—such as President Hassan Rouhani and his allies, who run the day-to-day affairs of state—as the regime’s contractors in managing the country. They are also scapegoats who can help shield the supreme leader and IRGC, who wield the real power in the system, from blame for failures.

My imprisonment in Iran coincided with the early implementation of the Iran nuclear deal, a historic agreement that on paper was to restrict Iran’s nuclear program in exchange for the lifting of certain international sanctions but in spirit was held up as a sign of hope for a new era in Iranian-U.S. relations. From where I sat, the idealism looked just as misplaced as the hope for internal political reform.

The Iranian regime, as I saw it, was deeply ambivalent about the nuclear deal. It was eager to benefit financially, but the IRGC in particular feared that the deal might lead to demands for political and economic liberalization that would be detrimental to the regime’s interests. In fact, the Iranian regime and its hard-line supporters saw the efflorescence of economic activities in Iran because of the deal as a threat, and they worried that a burgeoning private sector would strengthen the society at the expense of the state. For this reason, they hastened to stifle the private sector, especially the tech industry.

Iran’s tech industry could easily have become an engine for economic growth, given the country’s immense talent pool of world-class engineers. But the hard-liners saw it as a threat. Shortly after the nuclear deal was concluded, they initiated a relentless campaign against something they called nofuz, or infiltration. The campaign specifically accused tech industry and start-up entrepreneurs of being allied with the West (especially the United States) and seeking to softly subvert the Iranian regime to bring about regime change. I met a good number of well-educated entrepreneurs, technology specialists, and intellectuals in prison. They had all been arrested under the rubric of nofuz. During the same period—just after the implementation of the nuclear deal—the regime continued its repression against women’s rights activists, religious minorities, and liberal intellectuals, among others. Fellow prisoners with familiarity with these groups told me that they thought this persecution actually intensified.

Regionally, too, the Iranian regime was eager to express its independence and its undiminished resistance to U.S. interests after it signed the nuclear deal. It tested ballistic missiles and continued supporting proxies in Iraq, Yemen, Lebanon, and Palestine, as well as the Bashar al-Assad regime in Syria. It stirred tensions in Saudi Arabia and Bahrain. The underlying message was loud and clear: Iran was not going to modulate its behavior in the region because of the deal but would instead expand its influence.

American policymakers and the public should understand that at the heart of Iran’s problematic relationship with the United States lies the following fact: the theocracy’s survival and its elite’s prosperity require maintaining hostility against the United States. In order to sustain a state of conflict, without its leading to war or the destruction of the regime, the Islamic Republic is constantly playing a delicate game—one that unfortunately entails real consequences in suffering for someone like me, as well as for ordinary people throughout Iran and the Middle East.

The United States is a lot more important for Iran than Iran is for the United States. But Iran is a spoiler power that can cause great damage to the interests of the United States and its allies. This destructive capability is the principal leverage Iran wields. Washington should never lose sight of it, no matter how polarized debates on Iran become. Wishful thinking about the capabilities of Iranian moderates or the possibility of changing the revolutionary nature of the Islamic Republic actually helps fuel the anti-American rhetoric and disinformation of the Iranian regime and allows it to take advantage of the political divisions inside the United States.