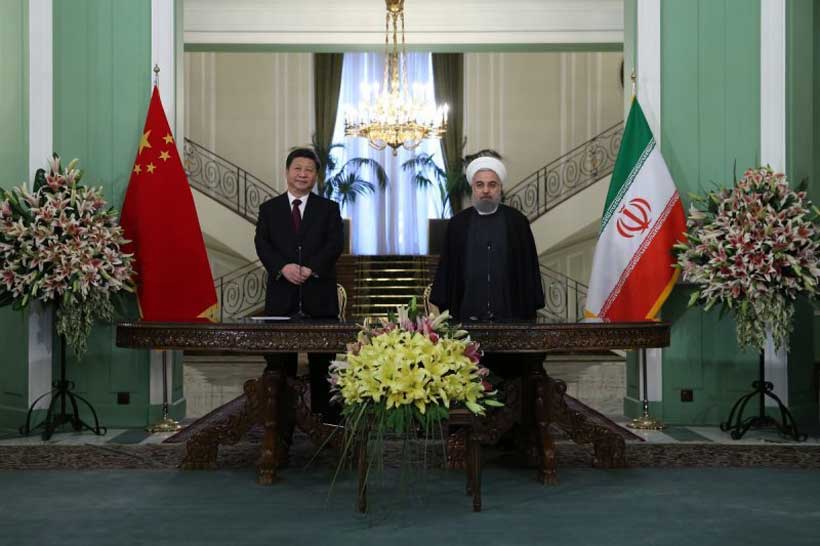 Re: Strategic Partnership Agreement Being Negotiated Between the Islamic Republic of Iran and the People’s Republic of China

As the international community convenes to commence the seventy-fifth session of the General Assembly, we write you to register our great dismay at having recently learned of a comprehensive Strategic Partnership Agreement being negotiated between the governments of the Islamic Republic of Iran and the People’s Republic of China. Negotiations concerning this Agreement commenced in early 2016, following a visit to Iran by President Xi Jinping, when the two countries undertook to commence a “new chapter” in their bilateral relations.

Iranians have historically proven adverse to allowing their country to align too closely with any great power. It should therefore come as no surprise that the recent emergence of scant details of the proposed Agreement has stoked a fierce reaction within Iran. The most common expressions of dismay posted on social media accounts in Iran are that the Islamic Republic is selling off the country to China. Critics have also routinely drawn parallels between this proposed Agreement and the humiliating Turkmenchay treaty pursuant to which Persia ceded vast territories to Russia in 1828.

Indeed, the last time any Iranian Government contemplated entering into a bilateral treaty that affected the sovereign powers of the country was the Anglo-Persian Agreement of 1919. While that agreement was considered in the immediate aftermath of the immense devastation of the First World War, and was considerably more modest than the comprehensive scope of the current Strategic Partnership Agreement, the intensity of the public outcry that ensued against foreign interference amongst Iranians compelled the then Government of the country to abandon the proposed initiative altogether.

For over a century concepts such as the moral imperative to pursue diplomacy, always frankly and in the public view, or the need to pursue international treaties, through open covenants openly arrived at, have been recognized as cherished principles to guide members of the international community in their conduct of international relations. However, despite the many implications such an agreement will have for Iranians, the Islamic Republic has proven steadfast in failing to act in a transparent manner and is proceeding in a loathsome fashion to suffocate the legitimate aspirations and offend the inalienable rights of its citizens.

We deem it our collective responsibility to amplify the voices of Iranians that have grave misgivings with the Agreement being negotiated between the Islamic Republic and China. The fervent longings of Iranians are simple – a desire to live freely on their native soil, under their native sun, and working for the advancement of their country free from the menacing yokes of domestic corruption or foreign exploitation.

Rather than curse the darkness surrounding the opaque details of this craven Agreement, we are profoundly mindful of our responsibility to light a candle to illuminat the many dangers that will befall Iran in the event it proceeds with an Agreement with China. We sincerely hope that members of the international community will not turn their backs on the legitimate aspirations of Iranians, but instead stand in solidarity with the steadfast yearnings expressed by Iranians.

Iran’s latest gambit will prove gravely injurious to the welfare and future prosperity of Iranians. The Islamic Republic’s rationale for pursuing such an Agreement is to consolidate its economic grasp and perpetuate its political grip on Iran. Even the limited available information regarding the Agreement reveals that the Islamic Republic intends to tether Tehran to Beijing politically, and embed China into the economic and social fabric of Iran. Proceeding with such an Agreement would be tantamount to committing Iran to a straight-jacket that will severely restrain its political and economic sovereignty.

The fundamental predicament is that far too consistently the Islamic Republic has confused Iran for a cause, rather than a country. Since its inception over four decades ago, the regime has consistently failed to safeguard the welfare of its citizenry and has systematically squandered Iran’s resources to pursue reckless geostrategic objectives. We are therefore certain that Tehran’s current gambit to consecrate its relationship with Beijing is animated by the same reckless impulses and will subordinate the interests of Iranians to the regime’s own concerns. Even if we were to overlook the Iranian regime’s legacy or the antecedents of its state practise, it would be foolish to assume that Tehran can withstand the exacting terms to be demanded by Beijing.

The profound economic asymmetry between Iran and China, exacerbated further by the unprecedented economic and political distress currently afflicting Iran, will deny the Islamic Republic the requisite leverage to negotiate a fair, balanced or equitable Agreement. At a bare minimum, Iran will succumb to selling its commodities at heavily discounted rates and capitulate by granting China an exclusive right of first refusal to bid on all future infrastructure projects.

Undertaking a binding long-term agreement or proffering another country endless opportunities to infrastructure projects spanning every realm of economic activity is inimical to the best interests of any developing country attempting to establish a foundation for sustainable growth and prosperity. The leaked Framework Agreement reveals an ambitious plethora of financial, legal, technological and security commitments, and cites a catalogue of over 100 prospective economic projects involving Iran’s most critical infrastructure. Given the Islamic Republic’s morass of mismanagement and malfeasance, in the event an Agreement is finalized such

commitments will likely metastasize to imperil the economic sovereignty and territorial integrity of Iran. In other words, the commitments contained in the Agreement will expose Iran to the prospect of the appropriation of critical infrastructure or territory should the organs of the Islamic Republic default on loans used to underwrite such projects.

It would therefore be unconscionable to confuse the hollow interests of the Islamic Republic for the hallowed yearnings and aspirations of aggrieved Iranians, or to conflate the interests of the regime with the future welfare and prospects of its citizenry. A prospective agreement will amount to a Faustian bargain that irrevocably suffocates the yearnings, ensnares the fortunes, and shackles the prosperity of Iranians for generations to come.

In light of the profound chasm that exists between the intentions of the Islamic Republic and the genuine aspirations of Iranians, and the reality that a feeble Iranian Parliament will not adequately scrutinize or ratify an eventual agreement, China should be estopped from invoking the principal of pacta sunt servanda to assert that Iran is bound to a prospective agreement for 25 years. Rather, any unconscionable concessions the Iranian regime heaps on China to secure a Strategic Partnership Agreement, should be treated as the tainted fruit of a poisonous tree.

Conversely, by steadfastly refusing to safeguard the inviolable sovereignty of Iran or the inalienable rights of Iranians, and by acting outside the contours of its own constitution, the Islamic Republic has acted in an egregious manner that represents an affront to the most fundamental principles of democratic governance. The only means by which the Islamic Republic may cure the fundamental defect of failing to secure the informed consent of Iranians to a prospective agreement with China, would be to subject an eventual Agreement to public approval by way of a national referendum. In the absence of agreeing to such a procedure for popular ratification, the Islamic Republic has forfeited its sovereign prerogatives and is effectively barred from binding Iranians, their children, and their children’s children to a suffocating Strategic Partnership Agreement.

We enclose further background information for your ease of reference. Please accept assurances of our highest respect and considerations.